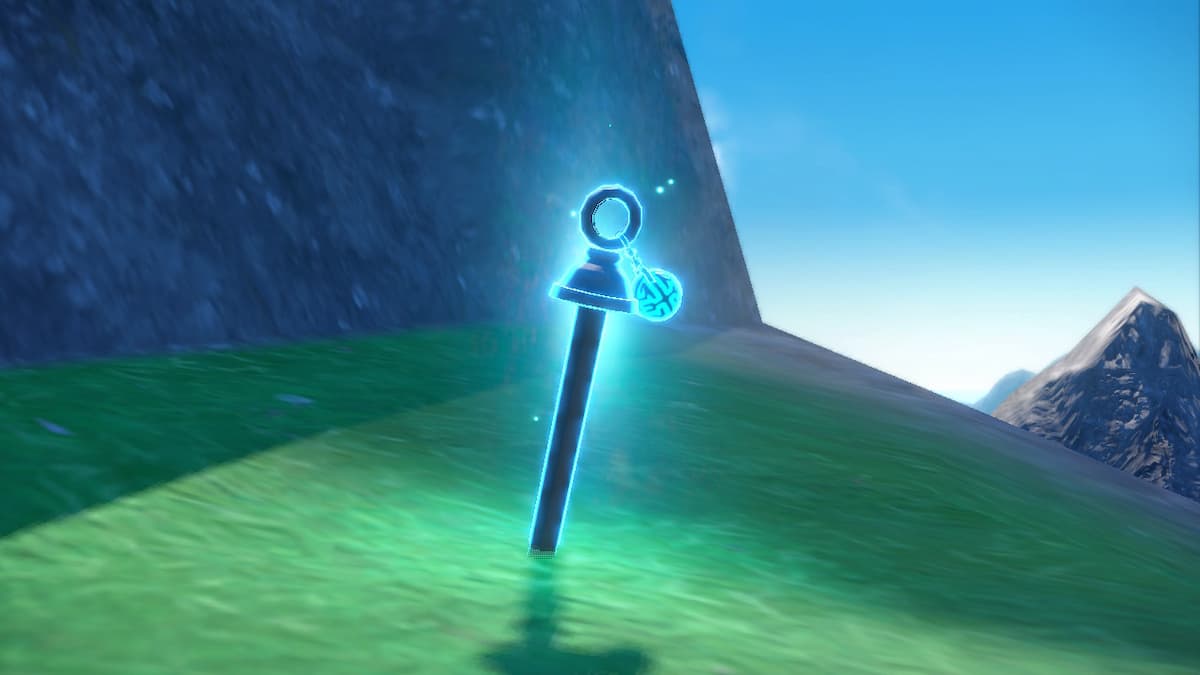 Several areas in the Paldea region feature glowing stakes that can unlock the locations of the Legendary Pokemon. In total, there are four sets of colors: blue, green, purple, and yellow. With this guide, we’ll focus on where to find all the blue stakes in Pokemon Scarlet and Violet to open the Firescourge Shrine.

To get the blue stakes of Pokemon Scarlet and Violet, players should defeat the Titans to upgrade Koraiden/Miraidon’s traveling abilities, especially the climbing skill of the False Dragon Titan. Those who don’t do these missions first will have difficulty getting around to these areas. Additionally, if you want to catch the Legendary Pokemon, your team members should at least be at Level 60.

Now that we got the requirements out the way, here are all the blue stake locations in Pokemon Scarlet and Violet:

At the edge of Glaseado Mountain, players can get a blue stake on a small patch of land. You may run into wild Pokemon around this area, so try to defeat them before grabbing the tool:

To reach the blue stake location of North Province (Area One), you must climb up a hill with Koraiden/Miraidon. The tool can be found near the edge of a cliff:

The next blue stake is in Tagtree Thicket by the cliffs of Glaseado Mountain. If you want to obtain this item, you must go up this hill:

Players will need to use Koraiden/Miraidon’s climbing ability to reach this blue stake location. You should be able to see a small patch of grass on the map (the character waypoint) to acquire the stake:

The following blue stake location of Pokemon Scarlet and Violet is above Levincia near the East Paldean Sea. You’ll need to reach the top of the hill to obtain the item:

Players can find a blue stake in North Province (Area Two) near some ruins. You can enter through the broken doorway to grab the item, where you can also obtain a TM:

You can locate another blue stake above the Pokemon Center of North Province (Area Two). Like many of the areas, players must climb up a hill to acquire the item:

This destination is also near the entrance of the Firescourge Shrine in Pokemon Scarlet and Violet.

Where To Find the Firescourge Shrine in Pokemon Scarlet & Violet

At the top of the waterfall, you should see the cave to the Legendary Pokemon, as shown in this image here:

Once inside this area, players will unlock the Legendary Pokemon’s (Chi-Yu) doorway with the eight blue stakes:

As you can see, several Pokemon will try to challenge you, so it’s best to eliminate a few of them to clear out a path.

That does it for our guide about all the blue stake locations of Pokemon Scarlet and Violet. For more content about the game, you can explore the relevant links below, including our guide about how to get Leaf Stones.