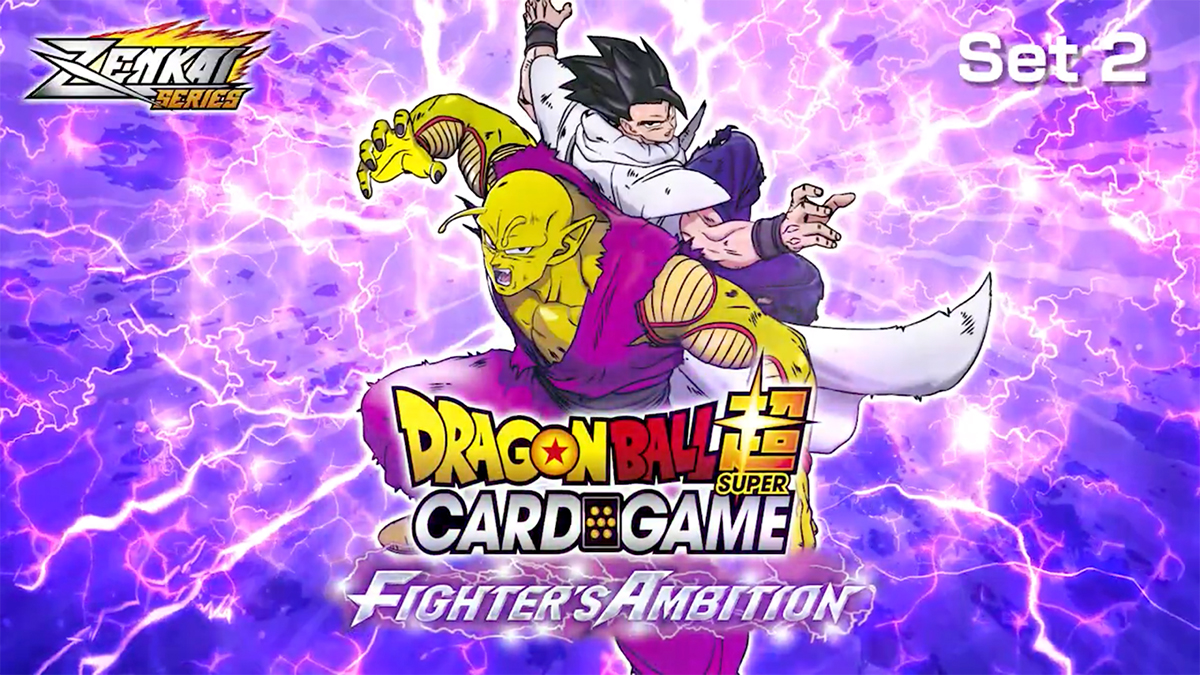 Dragon Ball Super Card Game is powering up with every new set and continues to lead the way as the best anime-themed trading card game. The new Zenkai block kicks off a new era for expansion sets and marks a perfect starting place for new players and an exciting revolution for veteran players. With this second release, Fighter’s Ambition builds off the hype from the Dragon Ball Super Hero Movie and offers plenty of fun and thematic cards to keep players enjoying their experience. To help you get the most from this second Zenkai release, we’ve compiled?the top 10 best cards in Fighter’s Ambition: Dragon Ball Super Card Game.

Pan is back and making waves with her red reboot leader starter deck, but make no mistake, she’s always been a powerful character as the daughter of Son Gohan, and this card gives us a glimpse of her talent. On its own, this card doesn’t seem too impressive, but it still has barrier and lets you draw a card, so it’s essentially free card value that’s untouchable. It really starts to shine when used with a card later on this list, Piccolo, the Infiltrator, and another good offensive card, SS Son Gohan, Wrathful Awakening, making it an integral part of the new blue deck archetypes.

Son Gohan, Hostile Saiyan Encounter is a super useful two-in-one card effect for black or Master’s Teachings that works by being played as a combo first, either Z-Energy or regular, and then making sure it goes to your drop area. Next, you can use it from your drop to negate a Battle Card’s attack without paying energy, instead taking a card from your life, and then putting Son Gohan, Hostile Saiyan Encounter into the battlefield.

From the battlefield, it can be added attack pressure or used as a combo one more time before being removed from the game. If your leader is black, you can also send one of your opponent’s Battle Cards to their Warp when adding this card to your Z-Energy.

Piccolo, the Infiltrator is such a versatile Battle Card that can be discarded turn one to let you search your deck for and play a Pan, Glimpse of Talent, which lets you use her card draw ability. Or, you can play this on turn two and have a 20,000 power Battle Card with Deflect and Dual Attack. When you pay the energy to play this card you can either give it Barrier for the turn or play a Pan, Glimpse of Talent.

With so much added value, this card will be a perfect inclusion into aggro-style blue decks for sure. Not to mention, how cool is it to see Piccolo in a stylish special forces get up?

Son Gohan, Power Unshackled shows how dedicated this set is to the new powered-up Gohan from the Super Hero Movie, and incentivises you to play a Super Hero/SH leader. This card is literally the perfect combo; after you use it in a combo, it enters play, and during your turn, you can put it into your drop to prevent your opponent from attacking with Battle Cards on their next turn. The only way to get around this is for them to put one of their Battle Cards that costs two or less under their deck each time they attack– which they would never do.

Extra cards need more inclusion in this TCG, and Decisive Strike proves that by being an ultra-cheap counter play that can definitely fit into any blue deck. Blue is arguably the best color for counter cards, right up there with yellow, and this Decisive Strike will help you stop an opponent’s floodgate card designed to slow down your attacks or slow down aggressive decks if you’re playing defensively. Plus, the artwork looks great, showcasing Son Gohan powering up before entering his new higher state.

Beerus, Airy Annihilator is a new Z-Battle card that continues to demonstrate the power of the Zenkai series. Since it’s in your Z-Deck, it’s basically always ready to be played as soon as you’re able to pay for its cost. And this is a card you’ll want to have up your sleeve at any time because when it attacks, you can get rid of one of your opponent’s battle cards that cost more than their current energy, and if your opponent has at least three energy, you can spend two blue energy to get rid of any of your opponent’s Battle Cards ignoring barrier, plus gain dual attack for the turn! This Beerus is an incredible all-in-one defensive and offensive package.

Another awesome Z-Battle Card, Jiren, the Immovable packs a huge punch, as evident from his artwork. Jiren is a new fan-favorite character who’s not yet as prevalent in the TCG, so seeing more of him is always a good thing. When you play Jiren, you can protect one of your Battle Cards until your next turn and he has an activate main ability that’s rare; he can use your Z-Energy to directly remove markers from your opponent’s Unison. To top it all off, if you remove at least two markers, he gains a huge +10000 power boost and Double Strike making him a beast.

The special rare version of SS Son Goku, SS Vegeta, & SS Trunks, Triple Combination looks incredible and is awesome to behold in person, especially seeing these three Saiyans together. Gameplay-wise, this is an easy-to-play card that can help swing the momentum of the battle back in your favor. As long as you have a red Saiyan in play, you can play this card over it for only one red energy and then hit one of your opponent’s Battle Cards for -30,000 which should eliminate almost anything. This will easily be a popular card for both collectors and players alike.

Son Goku & Vegeta, Immortal Rivalry is another special rare that looks fantastic but also has competitive usefulness. When you play it, it instantly replaces itself, and if you already comboed with it into your Z-Energy, it lets you reuse two of your Battle Cards from your Drop as combo cards and plays itself back into your Battle Area. Make sure to pack this into your blue deck if you plan on taking advantage of Z-Energy.

The most iconic card from this set looks similar to the secret rare from the previous set and will be an awesome showpiece for your collection, especially if you’re a fan of Gohan and Piccolo. As a dual-color blue and yellow card, it’s flexible enough for either color if you want to play a deck with an aggressive combo strategy. Although it costs eight energy, you can play it for a single blue or yellow energy if you have at least three cards in your combo area.

When it attacks it draws you a card, increases its battle power to 24,000, and gets rid of an opposing Battle Card that costs three or fewer even if it has Barrier. The card looks fantastic and has powerful effects so make sure to get at least one copy of this card for your collection if not an entire playset of four!

This set does a great job of building up the Zenkai series and there are more excellent and fun cards that didn’t make this list like a brand new green Broly archetype for fans of the Dragon Ball Super Broly movie, an archetype for the villain Magenta with a host of awesome looking villain Battle cards, and more support for Gamma 1 and Gamma 2. Competitive players will find meta cards to boost their current decks, but make sure to collect as many playsets of the set as possible because you never know what cards in this set will become sought after in the future as more leaders and archetypes are released in the Zenkai series.