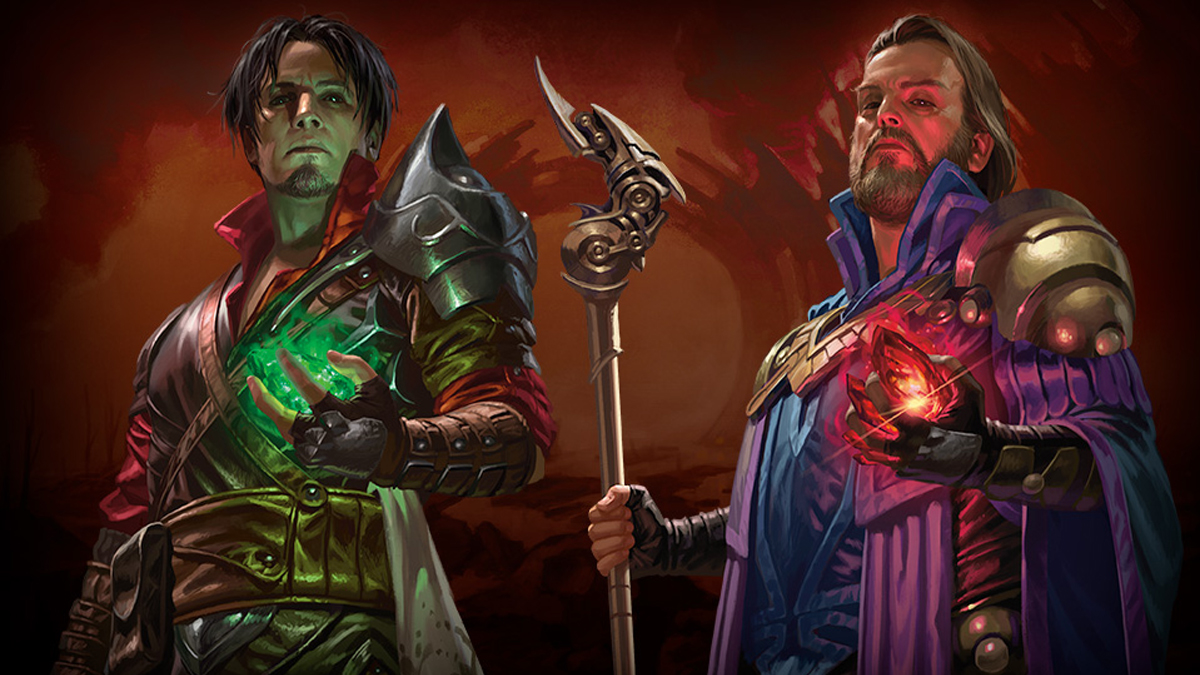 The legendary Brothers’ War is here, and for those who are unfamiliar with Magic the Gathering’s history, the feud between the brothers Urza and Mishra is one of the earliest and most infamous parts of MtG’s canon. Wizards of the Coast has released a brand new set based entirely on the mythos of this war, along with two new thematic preconstructed decks, one based on Urza and the other on Mishra. Both of these decks are great for collectors since they feature new cards and are fun to play right out of the box. After you’ve become familiar with how each deck plays, this guide will show you how to upgrade The Brothers’ War Commander MTG decks.

The Iron Alliance precon deck is led by Urza, Chief Artificer who is raising a vast army of artifact creatures to win the war. His abilities include an affinity for artifacts which decreases his casting cost by one colorless mana for each artifact you control and he also gives your artifact creatures menace, which means they can only be blocked by two or more creatures. To top things off, at the end of your turn, Urza creates a free 0/0 artifact thopter creature that gains +1/+1 for each artifact you control. The more artifacts you play with this deck, the more you’ll be rewarded.

The great thing about Urza’s affinity ability is that you should be able to keep casting him from your command zone for only white/blue/black mana and avoid any commander tax penalties. When playing this deck, you’ll quickly learn that it’s made to work around plenty of cheap artifact creatures both as casted spells and created as tokens.

There are several cards in the deck that feature the ability of metalcraft which activates a special effect on a card when you have three or more artifacts in play, like Vedalken Humiliator, and there are cards that let you tap artifacts for extra effects like Shimmer Dragon, which lets you draw a card every time you tap two artifacts. You also have blanket effects that increase the power and toughness of all your artifact creatures like Steel Overseer and Tempered Steel.

When it’s time to remove and add cards to your deck, it’s always a fun process to experiment with the infinite combinations MtG allows. The new cards in the deck fit perfectly and most don’t need to be removed. March of Progress lets you double your army of artifact creatures if you overload it and Thopter Shop gives you added card draw each turn and creates a thopter token.

Tawnos, Solemn Survivor is the other legendary commander in this deck, and he packs a powerful combination of effects letting you copy one of your artifacts in play, mill two cards into your graveyard, and then lets you sacrifice two of your artifacts to copy an artifact in your graveyard by exiling it. These are some of the first cards you should remove from your deck since they don’t synergize as strongly as the cards you can add:

This list will reduce your reliance on casting artifact spells and also on big creatures that don’t have bomb effects. Most of your power comes from generating tokens and casting creatures that have effects that synergize with your artifact token army strategy.

With your leftover precon, you have plenty of cards to win with token artifacts and bomb creatures like the Sharding Phoenix. Given this, you can opt to add more defensive spells to help your deck’s strategy. Blue excels in counterspells while white and black have removal for creatures, artifacts, and enchantments.

There are still plenty of cards that take advantage of this deck’s ability to pump out artifact tokens, and here are great cards to consider adding:

Mishra’s precon deck is a lot more straightforward and focuses on the lust for power that Mishra was stricken by during the war. His ability lets you copy one of your artifacts at the beginning of your combat phase and makes it a 5/4 Warform creature with haste that gets sacrificed at the end of your turn. Talk about thematic! He won’t be easy to recast and requires more investment, but his ability does hide a tricky infinite combo.

All you need is the Voltaic Key and any artifact in play that generates at least mana. Once you copy the mana artifact, you can untap it infinitely with Voltaic Key since you always net mana over the Key’s activation cost of two! With this kind of untapped power, you should be able to cast anything you want on your turn and win!

Looking at the new cards made for this deck, like the legendary Ashnod the Uncaring, it’s clear this deck wants to copy artifacts to generate powerful effects. Ashnod allows you to abuse already frustrating cards like Mindslaver and Academy Ruins, and get double the effects from cheap artifacts making them gain even more card advantage. There are also cards with incredible abilities that fit into Mishra’s chaotic theme like Wondrous Crucible and Smelting Vat.

Before adding new cards, cards will need to be removed to make room, and these include cards that don’t have strong artifact ties or don’t have enough of a bomb effect. A good place to start is with this selection:

Red and black pack a ton of destruction, damage, and removal, so you’ll be able to add a bunch of these types of effects depending on your meta and playgroup. Since Mishra’s ability isn’t as focused as Urza, there’s plenty more options you should consider adding depending on your play style:

Now you know how to upgrade The Brothers’ War Commander MTG decks and get the most from them. Both decks rely heavily on artifacts, which is true to the story and background of Urza and Mishra during their time. With nostalgic retro art borders and plenty of exciting new cards that capture the themes of the Brothers’ War, MtG Commander players will be able to enjoy the next chapter of this wizard battling saga. Be sure to check out some of the best MtG cards from the new Brothers’ War set and some of the best competitive Commander decks in the format.