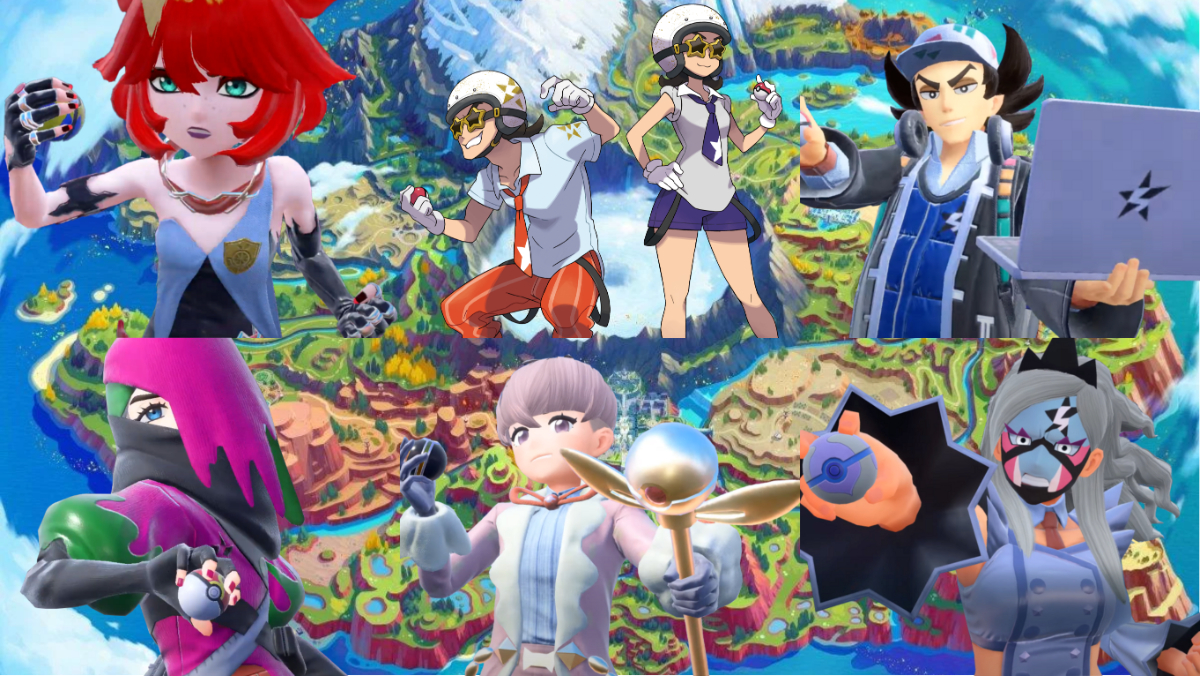 Team Star fills a role in Scarlet & Violet; as is typical, each Generation of Pokemon traditionally brings a new organization/team to the table. But not all of them have the corrupt intentions of Team Rocket or share the feud held by Team Aqua and Magma. Putting a different spin on things, Team Star consists of misfit students of the Academy you attend in-game. The Team is split into five individual Bases throughout the Paldea Region, with each Base having an assigned Boss that you will defeat during the Starfall Street gameplay route. Here’s a list of all five Team Star Bosses and everything you need to know about them.

Mela is the leader of Team Star’s Fire Crew, the Schedar Squad. Matching her punkish outfit is her fiery personality and attitude toward others, leaving no questions regarding her role as the Fire Crew’s Boss. Despite her attitude, it is revealed through flashback scenes that Mela is much less hostile than her bold clothing and competitive spirit may indicate. She also holds an excellent level of sportsmanship to the player character after her defeat, even going as far as to compliment your Pokemon. This shows that there is a deeper personality than what is shown on the surface, making her a very lovable character.

Mela uses Fire-Type Pokemon, and is generally one of, if not the first Team Star Bosses that you’ll face in your journey through the Starfall Street route. Her team consists of a Torkoal and the Schedar Starmobile, so you’ll want to use a Water, Ground or Rock Pokemon for an advantage on her team. For more information and tips on defeating Mela, check out our complete guide for how to beat Team Star Fire Crew.

Giacomo is the Boss of Team Star’s Dark Crew, known as the Segin Squad. Giacomo is also one of the first Bosses you will face off against in the Starfall Street route, using a team consisting of Pawniard and the Segin Starmobile. The best bet for getting the upper hand on Giacomo’s team is using a Pokemon with a Bug, Fairy, or Fighting Typing, as these types are super-effective against Dark Types.

In addition to his role as the Boss of Team Star’s Segin Squad, Giacomo has a strong passion for music. During your battle, he can even be seen listening to his headphones and holding his laptop open, presumably with a project in progress. It is also revealed that Giacomo is the one who created Team Star’s battle theme, which only proves his skill; because that is one seriously good tune. Giacomo also appears to operate as the leader of the Team Star Bosses under the absence of their ‘Big Boss’ and was even the one entrusted to create the rules and regulations of Team Star back when it was first founded. For more in-depth information on Giacomo and the Segin Squad, check out our complete guide for how to beat Team Star Dark Crew.

Atticus is the Boss of Team Star’s Poison Crew, the Navi Squad. If you’re wondering who came up with all the fantastic costume designs worn by the Team Star Bosses, that would be Atticus. This is revealed in a flashback, highlighting his eccentric personality and his passion for fashion design. It’s safe to say Atticus holds talent in this department. Not only is his outfit a brilliant indicator of his Poison-Type team, but the ninja-themed inspirations are a fascinating element that adds mystery to his character. You’ll be shocked to learn that underneath all of that fabric, Atticus’ actual hair color is an ash blonde.

In short, it’s thanks to Atticus that Team Star make such a visual impact, customizing their school uniforms to express themselves. However, his fashion skills won’t be the only thing you’ll have to look out for, as Atticus is a reasonably strong opponent. His team consists of Skuntank, Muk, and the Navi Starmobile. To get the upper hand against Atticus’ Poison-Type team, you can use a Pokemon with Ground or Psychic-Type moves. If you’re looking for more in-depth information regarding Atticus’ whereabouts and how to initiate his boss battle, consider following our complete guide for how to beat Team Star Poison Crew.

Ortega is the Boss of Team Star’s Fairy Crew, the Ruchbah Squad. Not only is he just the Fairy Boss for Team Star, but he is also the inventive genius behind the concept of the Starmobile. Ortega may be sarcastic and whiny at times, but underneath these qualities, he’s a loyal friend to the other members of Team Star and cherish their bond deeply, even referring to them as his greatest treasure in the whole world.

Ortega’s Fairy-Type-themed team includes Azumarill, Wigglytuff, Dachsbun, and the Ruchbah Starmobile. Ortega is one of the most difficult Team Star Bosses you’ll face throughout the Starfall Street story, so you’ll need to make sure you train up your team and come prepared. For your best chance of getting through your battle with Ortega easily, you’ll want to use Pokemon with Steel or Poison Typing, or at least Pokemon capable of using moves of these typings. For a more detailed explanation of Ortega’s Boss battle and how to clear the Ruchbah Squad’s base, check out our guide for how to beat Team Star Fairy Crew.

Eri is the Boss of Team Star’s Fighting Crew and leads the Caph Squad’s base. Eri is arguably the most difficult Team Star member to defeat in battle, with her team consisting of Toxicroak, Passimian, Lucario, Annihilape, and the Caph Starmobile. Despite her fierce war paint and tall stature, Eri is the opposite of intimidating, instead being one of the most likable and perhaps the nicest Team Star Boss. This is shown throughout the flashback scenes, where she is seen giving multiple compliments to Mela or showering Ortega with support when he was feeling disheartened.

Eri appears to have always been the strongest contender of Team Star and was even the one chosen to put the others through tough battle training, so they could stand firm on their own feet. Eri is shown to be extremely caring, considerate of her friends, and even a tad over-apologetic sometimes. Eri even went as far as to extend a helping hand to her bully when she became a victim of bullying herself. With a heart of gold like hers, it’s almost impossible not to love Eri as a character, and she’s the perfect boss to end your Starfall Streed adventure. For more in-depth detail about Eri’s team and how to best navigate clearing the Caph Squad’s base, check out our complete guide for how to beat Team Star Fighting Crew.

That’s everything you need to know about all Pokemon Scarlet and Violet’s Team Star bosses. For more helpful information, tips, tricks, and gameplay guides check out the rest of our Pokemon Scarlet and Violet content here at Twinfinite. We have a wide range of topics that are sure to assist you on your Paldea Region adventures, such as how to catch Gengar, how to evolve Shroodle into Grafaiai, and how to change the time of day and night.