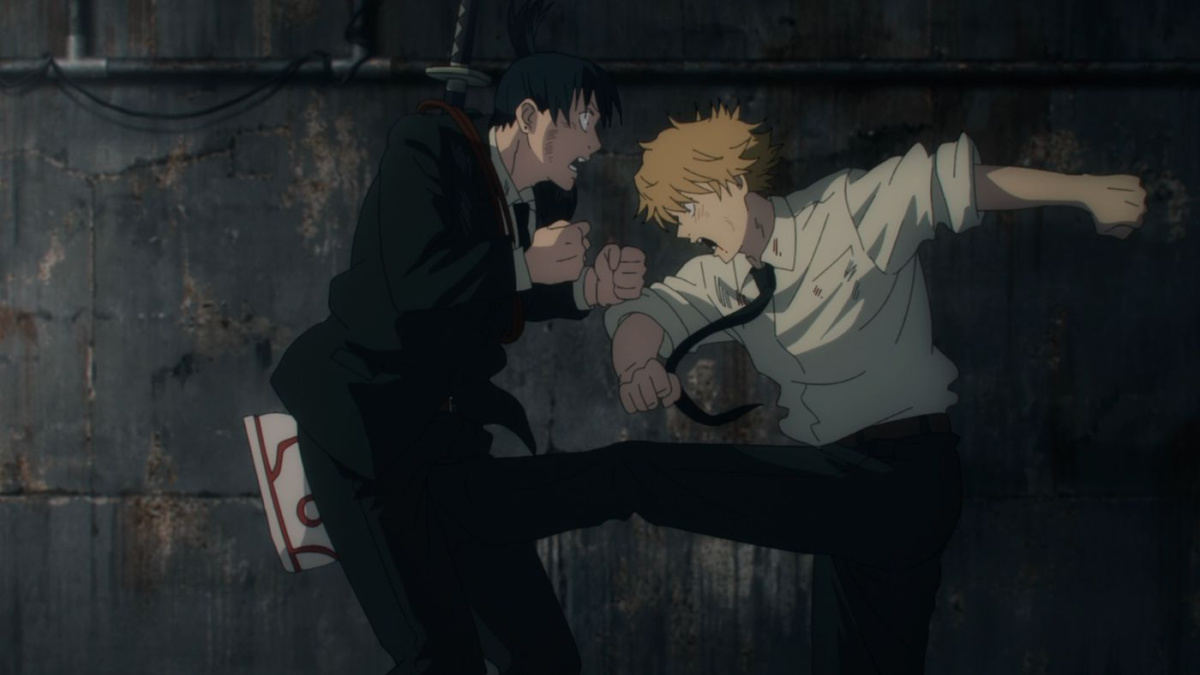 To say the Chainsaw Man anime has been a runaway hit would be an understatement. Beating out several big-name series and projects to become the biggest hit of the Fall 2022 Anime season, the adaptation of the popular manga series is well on its way to being one of the biggest names in the medium of all time. Not only that, but it’s done so in only a handful of episodes, thanks to some stellar animation, writing, and voice acting.

With all this in mind, one can only imagine what’s going through the heads of the series’ English Dub cast, who have been at the center of this whirlwind of success. We had a chance to speak with Ryan Colt Levy, the voice of Denji, and Reagan Murdock, the voice of Aki, about what it’s been like to be part of such a big project, how they nailed down the voices of their characters, and what they’re looking forward to performing from the series the most.

Ryan Colt Levy: Mindblowing. I think all of us are feeling that we’re still in the “pinch me” moment even though we’re very much in the middle of it. Insane gratitude.

Reagan Murdock: Yeah, like he said: Insane gratitude. Just so blessed. We love this story so much, and we feel so incredibly privileged to be part of it and feel a responsibility to do our best. And that’s what we’re doing.

Keenan: How much did you guys know about the series before being signed on for the Dub? Were you aware of the manga or fans of the manga when it was in publication, or is the anime your first exposure to the series?

Ryan Colt Levy: (Chuckles) So I don’t know if you can see the whole set back there, but I’ve had this for a couple of years (gesturing to full Chainsaw Man manga collection). I’ve read it multiple times over. It was actually one of the first manga that I’d read in a long time, and kind of brought me back in a big, bad way because it was so radically different and Punk Rock and funny and sensitive. And I was like, “this is the dream role,” you know? So I’ve been a huge fan.

Reagan Murdock: I knew absolutely nothing about it going in. (Both laugh) I had to brush up on some manga in the process of getting through to those auditions. The more I read, the more I loved of it.

Keenan: Bit of a split question for you guys. Ryan: Because you were such a big fan of the series, what were some of your biggest inspirations for Denji’s character and how you shaped his voice and personality?

Ryan Colt Levy: A lot of it was thinking about the core of what his journey is. Knowing where it goes, really trying to be faithful to playing him in the moment as much as possible instead of playing the expectation of what I think people know him to be.

So a lot of it was just going back to the manga. Still, before every session – like, the night before every session –  I’ll pick up the manga and look at what I’m pretty sure is going to be what we’re going to go through, just to reappropriate my sense. Like, would he say this? Would he feel this way? A lot of it is just that: It’s really trying to live in the moment and make him feel like a real person. Because I think that’s how you get the most genuine response out of people viewing it, is by making him as real as you can.

Keenan: Reagan, for playing Aki: Were there any past characters that you drew inspirations from because you didn’t have the deepest pool to pull from for what Aki’s personality would be like and how it would change? Or did you have a set idea based on the information you were given?

Reagan Murdock: Totally! There is a certain amount that’s drawn from similar Shonen characters. You can name a million of the “Edgy guy with tragic backstory” characters. But I also wanted to, like Ryan said, make (the performance) very real and drew on a lot of personal experiences I’ve had. I’m also not the most social guy, and I have a history of being very strict with myself and with other people, so that was nice to pull from.

But like Ryan was saying, it’s important to know where your character starts and where they’re going to end up, and I kind of look at each scene as: How is this other character going to be challenging something about Aki, and make him question something about himself or develop in some way? And it’s a really rewarding experience to be able to do something like that as an actor.

Keenan: With the cast for this dub, they’re definitely using actors that aren’t huge names. How do you guys feel about the fact that this really big show that is taking off is utilizing talent that isn’t just the top-tier A-List?

Ryan Colt Levy: Personally, grateful. I think the other part of it is it’s just a matter of Mike, our Voice Director, and Crunchyroll in general, I think everyone who is working on the other end of this show, no one’s trying to do this to make it some kind of flashy thing of a moment. This is something really special, and I think it’s about – in Mike’s eyes – finding the most genuine people to portray them like we were talking about, in a real fashion.

It really just feels like the best people for the job. Every time I hear a new voice enter (the Dub), I’m like, “oh my god, that’s amazing!” We got to meet the Devil Hunter Squad just yesterday, and finally getting to hear them, I get excited about it, and I can hear the passion in their performances. I think that’s what it’s ultimately coming down to: Everybody’s auditioning for this stuff, and the stuff that’s ultimately getting picked by Mike is what feels like it fits together with this world that we’re making.

It’s not about how big someone is or how small someone is. It’s neither. It can be anyone as long as they fit.

Keenan: What has been your guys’ favorite moment out of the four dubbed episodes that have released so far?

Ryan Colt Levy: It’s really hard. I feel like I’ve already had so many moments that I really loved. There are a lot of individual one-liners that have been so fun. I think we both agree that the big fight scene in the alley between (Aki and Denji) is an all-timer (laughs). We may land on that one because we get to share it, so let’s say that one.

Reagan Murdock: Yeah. (laughs) It just establishes both of their characters so well. You start off with Aki being really brusque, very authoritative, very “This is the way it’s going to be. You are not equipped for this. Go home.” And Denji just immediately kicks him where the sun doesn’t shine. (Both laugh). He’s just so resilient and so irreverent, just challenges everything Aki thinks about the world and the way a person should be. It’s wonderful to see that that’s the start of their relationship and seeing where their relationship ends up later.

Keenan: How have the scenes where you’ve acted together impacted how you guys want to play your characters? Especially when your characters are on screen together?

Ryan Colt Levy: I think for me what’s been really cool about this is: One, Reagan and I have worked together on one show previously, and we got to play off of each other. So we already had a bit of a dynamic. And we live in different places, so we only got to meet in person back in October when we went to Comicon.

That was actually the real solidifying moment. That weekend we really got to become family and got a really good sense of each other in the comfort-zone way of like, “Now that we’re going back to our separate places and are going to record these characters in different times and spaces, we’re still going to bring each other into the room with each other.” Like, I always know that he’s got my back and vice versa. Whatever he’s going to do in the booth is going to make me elevate what I’m going to do.

Reagan Murdock: Exactly what he said. It’s wonderful knowing the person on the other end. A lot of times with anime, we don’t interact with the people at all we’re performing with. Just being able to know that this person, and everybody I’ve interacted with in Chainsaw Man, has been just amazing people.

And Ryan, in particular. (Speaking to Ryan) During that convention, you were such a big brother to me that weekend (both laugh). It’s just amazing to know that we’re all giving it our all, and we’re all going to be there for each other. What more could we ask for?

Keenan: What have been your guys’ favorite lines to deliver?

Ryan Colt Levy: It’s so hard. Denji has had so many good one-liners already (laughs). I think just getting to drop an F-Bomb, period. I never thought I’d get to do that. So the turn in the episode over Meowy where he realizes something’s on the table, that momentary turn to me was just so fun to play. So we’ll say that one.

Reagan Colt Murdock: Ryan’s been recounting it to me several times this morning, but that moment in Episode 4 when Aki is having that meeting with Makima at the end, and she’s like, “You seem a lot more flexible. Could that be Denji’s influence?” And he says, “I’m the same guy I’ve always been. Nothing’s changed.” But you can hear in his voice that, actually, a lot is changing, and he just doesn’t like that. (Laughs) It’s the first look behind the curtain that we both really enjoyed.

Keenan: Anything that you guys are looking forward to performing in the Dub?

Ryan Colt Levy: There are so many different emotional places that all of these characters still have to go, and I think it’s going to be exciting getting to go on that journey.

Reagan Murdock: There are several moments I can think of when his motivation doesn’t necessarily change, but you really see the walls coming down, and you see what a caring and passionate person Aki is. I’m really, really looking forward to getting to those moments.

Ryan Colt Levy: I will say that there’s a moment that Denji and Aki share – a bonding experience – that I’m looking forward to. (Both Laugh)

The Chainsaw Man English dub is now available on Crunchyroll, streaming every Tuesday at 3:30PM EST.